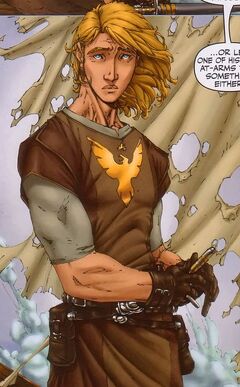 As a boy, he was tall, with sandy hair and bright blue eyes. With his quick smile, he was well liked in the keep, in spite of a boyish tendency to find trouble.

After his human and Valheru heritage coexist harmoniously, he took on a more elven appeareance, yet with a difference. His eyes lacked color to the point of being grey, and his eyebrows were less arched. His face was less angular, possessing a strong, square jaw. His ears, revealed by the golden circlet that held back his hair, were slightly pointed, less upswept than those of the elves. And he was much more massive in the chest and shoulders than any elf.

Tomas was the son of Megar the cook and his wife Magya and was a teenager from the city of Crydee.

He was charismatic and the boys' unofficial leader, yet he was also Pug's best friend when they were growing up in Crydee. During his Choosing, Tomas was educated under Swordmaster Fannon.

During the summer before the Riftwar, a ship smashed into Sailor's Grief. Tomas went to the ship with Pug to investigate. Presuming that all of the sailors were dead, they searched the ship before escaping as it sank into the waters. There they met one survivor of the wreck, who later died at Crydee. After the appearance of an alien ship, information from both the survivor and items found on the ship caused worry.

He joined Duke Borric, who feared the ship belong to a malevolent army, and set out to personally warn The Kingdom of the Isles. The group was ambushed several times in the Green Heart by moredhel, but was ultimately rescued by Dolgan and the dwarves of the Grey Towers. He guided them to Mac Mordain Cadal, an ancient mine through the mountains.

However, a wraith, a spectral creature whose touch steals life, attacked the party. Tomas was separated from the rest of the group in the confusion, and outran the wraith, despite running through a labyrinth of tunnels with little visible light; finding himself in an abandoned palace, he followed a band of moredhel and goblins who sought treasure. They were led to the room of dragon Rhuagh, who sent them away with magic. Sensing no bad intent in Tomas, he allowed him in, and gave him smoked fish brought to him by the kobolds who worshiped the dragon.

After the party was through the mine, Dolgan returned to look for Tomas, only to find him sitting comfortably in the cave of a dragon Rhuagh who was about to die; Rhuagh was told by Macros the Black many years before that these two would appear before him moments before his death. As per Macros' request, he told them that there was a chest with a gift for each of them. Tomas and Dolgan looked in the chest, to discover the legendary Hammer of Tholin, which used to belong to the old dwarf king, and a suit of gold and white armour, shield, and sword. Tomas donned the armour, and despite being too small for it, over time his appearance changed.

When they were exiting the Cadal, Tomas could see in the darkness and sense the wraith once more, which he drove away; Dolgan noticed he seemed to have a more commanding presence, and be larger and taller. Five days later they reached Dolgan's village, Caldara where the dwarves should host him for all the winter, until the blizzard passed.

Duke Borric's fears of invasion were realized, and the Empire of Tsuranuanni attacked the Kingdom through a rift in space-time, controlled by powerful Tsurani magicians, or Great Ones. The Tsurani homeworld, Kelewan, lacked metals that were abundant in Midkemia, thus much of the Tsurani assault was directed at the dwarves of Stone Mountain and of the Grey Towers. While staying with the dwarves, Tomas came into his own as a powerful warrior, seemingly possessed when in battle and was admired by the dwarves for his heroics. It was during this time that he started having strange dreams, in which he met a Valheru named Ashen-Shugar and talked with him. He seemed subtly changed each time, appearing to be less the human and more like the Valheru that Ashen-Shugar was.

The change was due to the armor gifted to Tomas by Rhuagh. It contained the bound essence of the Dragon Lord Ashen-Shugar, the Ruler of the Eagle's Reaches, whose power was contained within the armor. The armor imbued Tomas with his former power, melding them into one super-powerful mortal entity. This union, seemingly improbable due to the thousands of years between the lives of Ashen-Shugar and of Tomas, and their distinct differences in power, was made possible by the powerful and mysterious sorcerer Macros the Black.

When brought into Elvandar, the city of the elves, instead of being scared (which is how all other humans reacted to the magics of the elves), he instead felt at home there. He grew close to Aglaranna, the Elf Queen. They grew to be lovers, and he continued his subtle change into the Valheru. Tathar and the elven Spellweavers were wary of Tomas, because he was becoming one of the Valheru, who had enslaved the elves in ancient times. Over time, Tomas lost more and more of his conscience, slowly transforming into the long-dead entity of rage and battle-madness. The transformation culminated when the Tsurani prisoners of war were brought to the elven court. He killed several of the helpless Tsurani, commanding the nearby elves not to interfere. He would have killed Martin Longbow, but he suddenly recognized his boyhood friend and warned him not to oppose him. As he continued slaying more Tsurani, he came across a small boy who put him in mind of his childhood friend Pug. This then caused an internal battle, with Ashen-Shugar who wanted to kill all invaders of Elvandar, and Tomas wanting to spare the boy. Tomas and his human side, won the struggle, by virtue of his memory of his foster brother Pug, and was immediately overcome by remorse for all his cruel acts. Seeking to redress his callousness toward Aglaranna, and quell contention for the throne, he became Prince Consort to the Elf Queen, gaining the approval and acceptance of the elves.

He left Elvandar when Pug called for his help to find the Oracle of Aal. He summoned a dragon, Ryath, supplicating her that he only seek her as ally, not as a servant. They traveled to many worlds and wonders, before finally releasing Macros from a time trap.

They returned before the Valheru host threatened to return to Midkemia, but was trapped in the Lifestone of their own creation, when Tomas inadvertently activated it when stabbing his sword through a reborn Valheru and into the Lifestone. In the aftermath of the Valheru's banishment, he felt a great portion of his Valheru legacy absorbed into the Lifestone as well, but was reassured by Macros the Black that he would live a long life beside his Queen.

About a decade after the Riftwar, Tomas helped Gorath and Owyn to find the Book of Macros, a scripture which transported them to Timirianya in order to find Pug.

Through the following years, Tomas is content to live in Elvandar, though their son, Calis, preferred a more active role in service to the Kingdom of the Isles. Eventually, during the Serpentwar, he and the elven hosts of Elvandar aided the armies of the Kingdom, and once again, found himself battling great evils at the side of his childhood friend, Pug. Near the end of the battle, he fought the self-styled Demon King of Midkemia when the latter sought to claim the Lifestone. When Calis used his innate abilities to disassemble the Lifestone, the trapped energies of the Valheru Host dissipated harmlessly. This also affects Tomas as he loses a portion of his abilities, becoming more humanlike for the first time since the Riftwar.

More recently, Pug brought a Talnoy to Elvandar, seeking Tomas's memories of his Valheru heritage to find out more about the alien artifact. Shortly after, Elvandar was invaded by evil forces, killing many elves and setting the forest on fire before being driven back. The attack prompted Tomas to leave Elvandar to aid Pug in confronting the evil that sought to claim the Talnoy. Later, while guarding a cavern filled with Talnoys, he fought a would-be raider, Ralan Bek, whose unexpected superhuman prowess surprised the human-turned-Valheru. Only by exerting some considerable effort, Tomas was able to defeat the strange young man. It was later revealed that Bek contained the Dasati War God.

Tomas bore many powers innately to him from his Valheru heritage. Tomas could crush rocks with a telekinetic grasp, fly without a dragon faster than an eagle, could move faster than any mortal creature, was insanely strong, and his weapon bore magic that killed enemies with ease--that is to say, once an enemy was slain, they stayed dead.