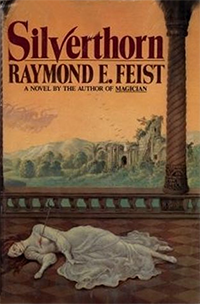 Silverthorn is the second book in the The Riftwar Saga and is the sequel to the massively successful Magician. Silverthorn was first published in 1985, three years after the original 1982 release of Magician. The book centers on the frantic journey of Prince Arutha to the Northlands in order to obtain a cure for his wife, Princess Anita who lies near death, poisoned by the mysterious plant Silverthorn.

A year after Lyam's coronation, Arutha returned to Krondor as the new Prince, to begin plans for his wedding. He met a young thief, the very same Jimmy the Hand who had aided his escape from the city with Princess Anita, who now warned him that there would be an attempt on his life. Arutha bought the cooperation of Krondor's powerful and highly organized guild of thieves, the Mockers, to obtain more information on the assassins. They learned that the assassins are members of the Guild of Death, the Nighthawks. Setting a trap, they captured two agents, who were revealed to be from the temple of Lims-Kragma, Goddess of Death. During interrogation, both prisoners willed themselves to death rather than divulge their plans. As the High Priestess of Lims-Kragma sought the truth from beyond the grave, one of the prisoner rose as a creature of the dead and revealed himself as a moredhel, slaughtering many royal guards, addressing Arutha as Lord of the West before being destroyed.

Injured in the attack, the High Priestess warned Arutha that the forces which opposed him were so powerful that they held the gods in contempt. Regardless, Arutha proceeded with his wedding. Another assassination attempt was foiled by Jimmy the Hand, but the poisoned bolt struck Anita.

With scant clues and a race against time for an antidote, Arutha led a party to the one place where any question may be answered, the great library at the Abbey of Sarth. He is joined by his brother Martin Longbow, now Duke of Crydee; Gardan, Jimmy and Laurie, now engaged to PrincessCarline. They were pursued doggedly by Murad, the Battlemaster of the moredhels, and his Black Slayers. They were turn back at the Abbey by Dominic, one of the brothers of the Order of Ishap.

Undeterred by Sarth's mighty defenses, two separate attacks were made with powerful sorcery, and both were barely repulsed. However, Arutha found out that the poison was made by a rare plant, silverthorn, and that he must journey to the elves of Elvandar.

The group decided to split: Gardan and Jimmy were to escort Dominic to Stardock, while the rest will continue to Elvandar. On the way, in Ylith, these group was joined by two more: Roald, childhood friend of Laurie, and Baru, a Hadati hillmen.

Now warned that Arutha's foes were formidable magicians, Pug asked the aid of Rogen, one of Stardock's resident scryer. The vision of the future revealed a dark entity, speaking in ancient Tsurani, and was even capable of perceiving the scryer past the barriers of time and probability. With that knowledge, Pug recreated the rift to Kelewan, accompanied by Dominic and Meecham, and went to find out more about the enemy they face.

In Elvandar, the elven Spellweavers revealed that the silverthorn plant grew only around the lake Moraelin, in moredhel-held territory. Nevertheless, Arutha and his band sneaked past sentries, picked several silverthorn shrubs, and with the help of Tomas, made their escape, barely escaping Murad and his horde of undead Black Slayers.

In Kelewan, Pug and his companions were captured in ambush by Great Ones of the Assembly of Magicians for his role in the destruction of the Imperial Arena a year ago. Tortured by Tsurani inquisitors, his Greater Path magic neutralized, Pug turned to Lesser Path magic, becoming the first magician ever to master both paths besides Macros the Black. Gaining time, he explained his reasons to the Emperor , and was given reprieve to continue his search in the Assembly's vast libraries. Following a clue, Pug traveled to the northern wastelands of Kelewan, and discovered a lost race of people living in a forest under the ice, the Eldar.

With the antidote made by the elven Spellweavers, Anita was saved, and Arutha's enemies set back by the death of one of their generals. But the leader of the moredhel, Murmandamus, vowed that in a year, the long-awaited invasion into the Kingdom would commence.

Retrieved from "https://midkemia.fandom.com/wiki/Silverthorn_(novel)?oldid=8216"
Community content is available under CC-BY-SA unless otherwise noted.