Start a Wiki
Shadow of a Dark Queen 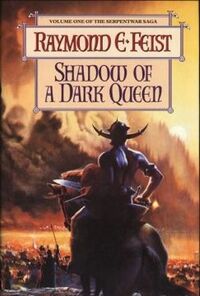 Shadow of a Dark Queen is the first book in The Serpentwar Saga and was first published in July 1994. It follows the story of Erik von Darkmoor and Rupert Avery (Roo) two young boys from the town of Ravensburg who are chased after murdering the Baron of Darkmoor's son (Technically Baron of Darkmoor for one hour) and their escape to Krondor.

They encounter a merchant, Helmut Grindle being attacked by bandits, and help him. They ride with him until Krondor, where there are guards checking every caravan, as the new Prince of Krondor is being coronated. They find an inn on the outside of town, where they are knocked out and brought to be Quegan slaves.

However, Kingdom forces intervene. They stop the slavers, and arrest Erik and Roo. They are given a trial, and sentences to be hanged. When they are brought to be hanged, they simply drop instead of being hung. They are brought to a camp outside Krondor to be trained as legionnaires. The camp is lead by Calis. Robert de Loungville is their sergeant, and Corporal Foster is their corporal.

However, spies find the camp, and they are forced, with the least training of the 50 or so legionnaires , to head to Novindus. It is revealed they are joining up with the Emerald Queen's army to find weaknesses within it, and report back to King Borric.

When there, they meet up with Praji, with mercenaries, and Hatonis, with some of his clansmen. They travel to the rendezvous in the Plain of Djams to sign up with the Emerald Queen after the fall of Khaipur. However, all mercenaries are forced to join the Emerald Queen's army rather than be paid.

They then camp North of Lanada, their next target of invasion. They decide to leave after Nakor scouted around and discovered that the Emerald Queen was in fact Jorna in a different body and that her emerald crown was a Valheru artifact. The band pretends to be on patrol and successfully manage to escape for several miles. When they are discovered, the Saaur chase them. They defeated 20 or so outriders, before realising hundreds descend upon them. They head into a cave and escape. In the cave, Calis discovers an ancient Panathian city.

When they get out of the cave, they head over a mountain valley, and take a mercenary camp belonging to Nahoot's Grand Company. The Saaur believe them to be Nahoot's company. They ride east to a motte and bailey fortification, where they discover two spies. News reaches them that Lanada falls by treachery and the main bulk of the army continues onto Maharta. They realise that the Emerald Queen needed the shipyards of Maharta to stage the invasion of the Kingdom and they decide to burn it down, setting it back for several years.

They successful cross the river, with heavy casualties. Later the Pantathian priests conjure a bridge of light for the army to cross. They set all the shipbuilding facilities on fire and attempt to escape only for it to rain. Nakor devises an ingenious plan and attacks the bridge with some magic.  In return the priests try to obliterate Nakor, and in the process, the priest's powerful magic burns the shipyards. The reaminder of the company escape on Prince Nicholas's ship.

Retrieved from "https://midkemia.fandom.com/wiki/Shadow_of_a_Dark_Queen?oldid=8843"
Community content is available under CC-BY-SA unless otherwise noted.