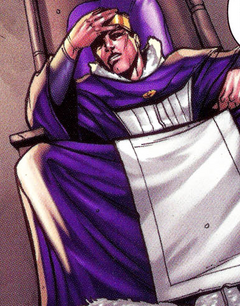 King Rodric IV is the King of the Isles during the Riftwar.

He was the son of King Rodric III by his second wife, Queen Janica, and nephew to Prince Erland conDoin of Krondor.

He was a lunatic.

His father had not named a heir and after the days of mourning, the Priests of Ishap gathered the possible heirs to present their claims. Erland conDoin, Guy du Bas-Tyra and Rodric himself were the most likely successors. Erland refused the crown in favor to young Rodric, because of his ill health. Guy du Bas-Tyra backed Rodric and the assembled Congress of Lords ratified his succession.

Then there was some battle over who would be the King's Regent. Guy had nearly won the position when Borric conDoin (who arrived late) objected supported by Duke Brucal of Yabon and Prince Erland; Caldric of Rillanon, the uncle of his wife was appointed so.

His early reign was uneventful with occasional border clashes with Kesh during his first five years of reign. After that he started a program of public improvements in roads, bridge, dams which resulted in excessive costs and high taxation. After six years, a delegation of nobles asked from the King to reduce the spending and ease the burdens on the people, but the King enraged, ordered their execution.

Immediately, Erland visited him and demanded reparation for the execution, and repeated their request. Rodric almost seized the Prince, but restrained from his counselors. Since then, Erland never visited Rillanon again.

The following year, to prevent a civil war and knowing how Erland is near to his succession, he decided that none may gather the armies without his authority and deprived the Prince of Krondor the right to muster the Armies of the West.

When Duke Borric visited Erland to warn him about the Tsurani invasion, Erland said that he could do nothing to organize the Armies of the West, and told them to visit the King himself in Rillanon.

While there, Rodric befriended Pug and was especially interested in how he killed the trolls and about the character of Carline. Pug also related him their concerns about the Tsurani. However days passed and Rodric didn't give any leave to assemble the armies, being under the influence of Guy du Bas-Tyra.

Kulgan gave the advice that Brucal of Yabon should persuade Rodric, since he is beyond any conspiracies and intrigues, but the events got ahead of them. Indeed a letter from Yabon came, that the war started. Saddened, Rodric gave Borric his leave.

As the war continues, his paranoid habits continued. He allowed Guy to go to Krondor to take control of the city. He accused Laurie and Kasumi as being agents of Borric when they went to ask for a peace treaty, and that Borric is a traitor, plotting to take his crown. He also never married, for his fear is too much to trust others.

Towards the end of the Riftwar with the Tsurani, he was injured by a blow to the head in battle, the blow managed to release him from his lunacy. On his death bed he named Lyam (Borric's eldest son) the new heir to the Kingdom of the Isle.