Start a Wiki
Rise of a Merchant Price 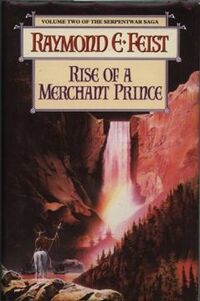 Rise of a Merchant Prince is the second book in The Serpentwar Saga and was first published in October 1995. It follows the story of Rupert Avery a young boy from Darkmoor that has just returned from the southern continent of Novindus and is set to make his fortune. The book also inter cuts to his childhood friend Erik von Darkmoor who returns back to Novindus as a corporal in the King's army.

Set right after Shadow of a Dark Queen, the story opens with Rupert Avery and Erik von Darkmoor returning from their voyage in the southern continent Novindus.  They were previously charged with the murder of a Kingdom Noble, Stefan von Darkmoor but their time in a mercenary company called Calis's Crimson Eagles serving for the Prince had them guaranteed for a pardon.  Roo's friend, Erik von Darkmoor decides to take up service as a corporal with the Crimson Eagles, which are a special branch of the army preparing for the incoming invasion of the Western Realm.  Roo on the other hand had promised in Shadow of a Dark Queen to marry the daughter of a merchant they met on the road after fleeing from their crime.  Roo starts off on a wine enterprise, transporting a number of moderately good wine from Ravensburg (famous for its wine) with his cousin Duncan Avery.  During the journey his father Tom Avery mysteriously falls into the campfire and dies.

At Krondor, the capital of the Western Realm, Roo failed to pay protection money to the Mockers, the infamous organisation of thieves.  As a result, his money was stolen, his wagons ruined, the wine barrels punctured and the horses killed. Additionally the whore called Betsy, Roo was with at the time was killed as was the stableboy.  Roo enlists the help of the Crimson Eagles and Duke James, and finds the man called Sam Tannerson who supposedly stole the money dead.  The Mocker girl called Kitty who killed him was later found and questioned, only to find that she also didn't have any of Roo's gold and she later becomes an agent of the Crown.  After the failed investment, Roo turns to Barret's Coffee House, a coffee shop that doubled as a restaurant and a business centre.  He enlists as a waiter and becomes friends with another junior waiter called Jason.  One stormy night, a drunken sailor with a heavy wagon pulls in too sharply around the coffee shop, and blocks the entrance.  The horse, strained from the stress of the load dies on the doorstep.  Roo's quick thinking saved the contents of the wagon (by pulling it into a nearby abandoned house using guild porters).  To his surprise there were bolts of silk that were not accounted in the inventory.  The owner of the goods, businessman Tim Jacoby (who runs Jacoby and Sons) angrily demands Roo for the silk and at that point, his two bodyguards attempt to attack Roo.  However, Roo's experience in the Novindus campaign and his superior fighting training with the mercenary group quickly overwhelm the party.  Jacoby grudgingly storms out of the building.

Roo resigns from Barret's Coffee House and meets up with Helmut Grindle, the merchant he and Erik encountered in Shadow of a Dark Queen.  His smuggled silk from Jacoby draws interest from Grindle and the two of them start a business called Avery and Grindle. Roo continues expanding Avery and Grindle with transporting goods for the coming war. However Grindle is soon killed by Jacoby. Roo eventually becomes richest man besides for Jacob Esterbrook with a clever plan involving an instigation for a monopoly on the grain market, coinciding a locust plague. He and the Bitter Sea Company soon hold the largest net worth and assets in the Kingdom.

Meanwhile Erik and a band of Crimson Eagles are sent to Novindus, to seek the lair of the Pantathians, to kill their young and ultimately end their race. Miranda, Calis and Boldar Blood, a mercenary from the Hall of the Worlds join them. However they soon find an enraged demon that has emerged from the rift between Shila and Midkemia which had already killed most of the Pantathians. The group are eventually attacked by the Saaur, and Bobby dies from a punctured lung while Calis is badly burned. Miranda escapes with Boldar Blood along with an artifact rescued from the Pantathian lair.

Roo finds out his friend is stuck down at Novindus, and uses his considerable resources to help him. He sails his largest ship to Novindus to rescue the group.

Retrieved from "https://midkemia.fandom.com/wiki/Rise_of_a_Merchant_Prince?oldid=7189"
Community content is available under CC-BY-SA unless otherwise noted.