Prince of the Blood

Edit
Prince of the Blood 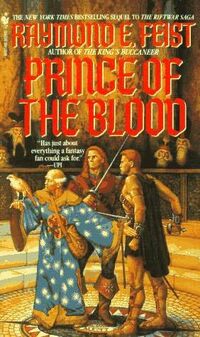 Arutha's twin sons Borric and Erland (with Borric now officialy the next likely King) have to attend the celebration of the 75th birthday of the Empress of Kesh. On the way there they stop in Stardock where James meets Gamina. They continue on but are attacked by slavers and Borric is taken into slavery to Durbin to be sold. The others continue to Kesh. Borric escapes and manages to get to Kesh with the help of a boy thief, a mercinary and a gambler (Nakor). On the way to Kesh he avoids several attempts to stop him getting there. Meanwhile Erland arives in Kesh where there are intrigues that are deadly and potentialy source for a war between the Kingdom and the Empire, however with the help of James and Gamina Erland manages to stay out of trouble until Locklear is accused of murdering the next likely Empress the daughter of the current empress. Just in time Borric arrives and with the help of Nakor things are sorted out and war is avoided. It is discovered that Locklear was also murdered by those who conspired against the Empress. The next Emperor is named and people are rewarded or punished as apropriate. The princes return to Krondor. Jimmy is sent Rillanon to serve.