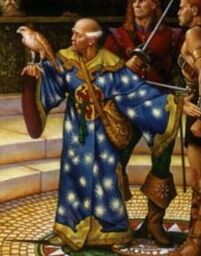 Nakor is a vagrant, magician, gambler, and trickster.

Nakor is of the Isalani, a race of Keshians with yellowed skin, and known both for mysticism and thievery. Nakor is an eclectic and eccentric character, with somewhat revolutionary views on energy, magic, and the "stuff" that makes up the universe. Though he is a magician of considerable ability, Nakor insists that all magic is merely trickery. He carries a seemingly empty rucksack, though he continually pulls oranges (or apples) from it. He is also a gambler, and a cheat. He is sometimes known as "Nakor the Blue Rider", though he is regularly horseless.

His views on magic are seemingly revolutionary in Midkemia. His thoughts, though mostly abstract, have impacted the perception of magic in that world. Nakor believes that the universe is a big bubble, expanding outwards, and that rifts are bends in the bubble. As a result of his revolutionary thoughts he has split the students of Stardock into a new group, the Blue Riders, that follow his teachings.

A large portion of Nakor's knowledge may have been endowed to him by the Codex of Wodar Hospur, and in exchange for it, he was rendered mad for a good part of his life, which explains his eccentric nature. This artifact, thought lost for centuries, is supposed to contain every known fact in the world. He turned it over to the temple of Ishap during the Serpentwar.

Nakor later finds (or is bullied into) accepting a disciple, the Isalani warrior Sho Pi. He also starts up the first temple for the slain goddess of good, (currently dead as a result of the Chaos Wars) Arch-Indar. The temple was formed during the Serpentwar Saga books, when Nakor came across a woman named Aleta whom he assumes is the avatar of the good goddess herself.

Nakor reveals that he was once married to Jorna, later known as Lady Clovis, the Emerald Queen and Kahil. He was Jorna's first husband, and this marriage is explained by Nakor as having been a ploy by her to discover a secret to remaining eternally young. She later went on to marry Macros the Black and give birth to Miranda.

Jorna in the form of Kahil questions Nakor as to why he remains in that body, implying that like her - he can invade other bodies and make them his own. This ability had not been attributed to any of the other 'great' magicians such as Pug of Stardock or Macros the Black, which makes Nakor an even more enigmatic character.

Nakor later finds a young man Ralan Bek. Nakor feels he is important, and explains to Pug that Bek may contain a fragment of Nalar, The Nameless One. Nakor knows this because, admittedly, he also has a fragment of one of the gods in him, though which god it is remains to be seen. It is then revealed that the god in question is Ba-nath/Kalkin, the God of Pranksters.

Nakor reveals to Calis that he is six times older than him. Since Calis was 50 years old at the time, Nakor is probably around 300 years old. Nakor also tells Pug that he has lived for three lifetimes, which, depending on what Nakor considered a "lifetime", would probably be consistent.

Nakor died after giving over the part of Ban'ath he had, and releasing the Godkiller.

In A Kingdom Besieged it is revealed that Nakor has been reborn in a fashion as a demon named Belog. He serves as one of Dahun's archivists in the Second Kingdoms in the Demon Realm. He is fleeing from the Darkness when he encounters a demon named Child who keeps him alive as they traverse the demon realm looking for a way to escape. When Child and Belog escape to the Taredhel hub world they discover a way into the Hall of Worlds. It is there in the Hall that his memories as his life as Nakor return and he realizes that like Miranda (Child), Kalkin has meddled with the order of life in order to return them in a manner of speaking.

After the battle in E'bar, Nakor and Miranda return to the demon realm to fix the damage caused by the Dread.

Community content is available under CC-BY-SA unless otherwise noted.