Start a Wiki
Mistress of the Empire 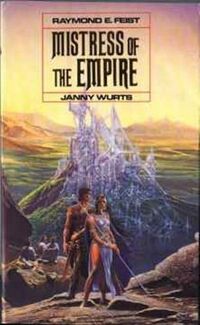 On the world of Kelewan, Mara of the Acoma is finally in a position of power within the Empire. She holds the esteemed position of Servant of the Empire and is no longer under threat of long time rivals the Lords of the Minwanabi. However her sudden rise in power comes at a cost, and makes her the target for those she has angered on her path to greatness.

Still settling into her new role as Servant of the Empire and wife of Hokanu of the Shinzawai, Mara of the Acoma’s life takes a new twist. Her son, Ayaki, is killed by the Hamoi Tong. A dart that narrowly missed Mara struck the gelding Ayaki was riding, which fell over and crushed him. Surprisingly the token of the Anasati house was found where the assassin slept, unusual because the tong's employers were rarely leaked out which had made the Hamoi Tong one of the most powerful in Kelewan. With revenge in her heart, Mara takes a Call to Clan war with Jiro, Lord of the Anasati, the Hadama Clan to the Ioni Clan. The Great Ones forbid the war and in doing so, obliterate the Pechta House for a petty mistake. They claimed it would tear the Empire internally leaving it weak to the outside.

Two years later, an attempt on her life takes the life of her unborn child and leaves her able to only bear one more child. She is poisoned by the Hamoi Tong, via a chocolate drink given to her by an assassin posing as a Midkemian trader. Only by the quick acting of Arakasi and Hokanu they find the antidote for the poison. Arakasi ruthlessly tortures the Thuril man who ran the apothecary and sold the poison to the Hamoi Tong, eventually killing him. Hokanu is ambushed by assassins at the prayer gate of the estate while trying to bring back the recipe to the antidote but manages to survive. As Mara recovers, Arakasi is given the task to destroy the Hamoi Tong by stealing its records.

Her last child, with her consort, Hokanu, is a daughter name Kasuma. Arakasi delivers the Tong's records and finds that Hokanu's father, Kamatsu, was murdered by a poisoned dart paid by Jiro. Mara realises that the Great Ones forbid the war as she had risen to high in power. She also concludes that the changes she and Hokanu tried to bring were stagnated due to the Assembly's hold over the Tsurani culture. The revolution of Tsurani traditions and society is completed in this novel as Mara journeys to the heart of the Thuril Highlands and the City of the Cho-ja’s where she seeks the aid of the Cho-jas magicians, powerful spellcasters that were forbidden in the Empire at the time the Cho-ja in the Empire were forced to treaty. She returns with the help of two Cho-ja mages, finding that the Emperor Ichindar was killed by an Omechan cousin.

Mara realises that the office of Warlord is no longer the prize and that the golden throne of the emperor was open- whoever wed the late Inchindar's daughter, Jehalia would become emperor, but word from Arakasi was bad, Jiro's army was already on the march to the holy city. Hokanu depoloys the Shinzawai warriors in an effort to cut Jiro from reaching Kentosani while the Acoma and Anasati armies crush together. Jiro is strangled as Hokanu's superior mounted horse warriors cut the Anasati honour guard, however Chumaka, the First Advisor is taken prisoner. In an expensive sacrifice to ward off the Great Ones, Mara chooses her oldest advisors, Keyoke, Incomo and many servants and warriors to act as a decoy while she travels in secrecy. Tapek, a Great One obliterates them to discover that Mara was not in the litter. The Black Robes locate Mara, who has taken shelter within a Cho-ja hive. They destroy the hive, but she escapes with the help of the Cho-ja magicians. The attack frees the Cho-ja to assist Mara against the Assembly. Previously, they were bound by the treaty, due to their nature. The series ends with Mara placing her twelve-year-old son, Justin, onto the Imperial throne with the help of the two Cho-ja Magician which serves as Emissaries from Chakaha and support from all the Temples. She acts as his regent and is given the title "Mistress of the Empire".

The book ends with Mara being reunited with Kevin of Zun, who has returned to Tsuranuanni as an ambassador from The Kingdom of the Isles. Unknowing that he has fathered a child, and shocked to find his son upon the Imperial Throne. Kevin and Mara, who has divorced Hokanu, quickly resume their romance.

Retrieved from "https://midkemia.fandom.com/wiki/Mistress_of_the_Empire_(novel)?oldid=10198"
Community content is available under CC-BY-SA unless otherwise noted.