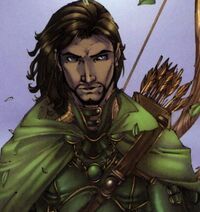 Martin conDoin, also known as Martin Longbow, is the Duke of Crydee after the coronation of a new King.

Martin is the illegitimate son of Duke Borric conDoin and a serving girl, Margaret of Yabon. He has two younger brothers, Lyam conDoin and Arutha conDoin. Martin is best known as Duke Borric's Huntmaster and Forester, although he later rose to become Duke of Crydee after being acknowledged by his father.

As a boy he was raised by the monks of Silban's Abbey, near the elven forest and played with elven children and hunted with Prince Calin and his cousin, Galain

When he came to Crydee, he was welcomed, but at his time for the Choosing, instead of standing before the assembled Craftmasters with the other boys his age, he had been placed directly with the old Huntmaster by the Duke, his father, so that he would grow far from the court.

Over the years Martin became Huntsmaster and Duke's Forester; he was seen as distrustful by the adults of the castle but accessible to children. He was called Longbow because he had no equal with the weapon.

When Borric decided to travel to the Free Cities before the Riftwar, Martin accompanied the party leading some trackers around the boundaries of Crydee and three days later, turned east that morning as they crossed river Boundary.

Martin as a Huntmaster acts as a scout and messenger to Elvandar for his brother Arutha during the Riftwar engagements at Crydee. Martin often patrolled the vicinity around Crydee for Tsurani forces. He caught Tchakachakalla and two other slaves during one of his patrols. When Arutha travels to Krondor to get aid Martin accompanies him. Despite their lack of success, they do manage to rescue the Princess Anita.

After the end of the war he travels with his brothers to the coronation during which he faces a decision to be King or step down in favor of the named successor, his brother Lyam. He refuses the crown and is later made Duke of Crydee by Lyam.

Martin, Lyam and Arutha travel the eastern Duchies of the Kingdom and the Eastern Kingdoms. He is present during Arutha and Anita's wedding when Anita is seriously wounded. He is one of Arutha's companions on his quest to find the cure for Anita. After they return successfully he returns to Crydee. A year later, when Arutha fakes his death, Martin accompanies him to the Northlands in his quest to kill the moredhel chieftain Murmandamus. In Armengar, he meets his future wife Briana. He is sent to get help from the dwarves at Stone Mountain for Armengar and later joins the rest of the Arutha at Sethanon. He returns with Briana to Crydee. Afterwards he married Briana of Armengar, of the line of Alwynne; they had two children: Marcus conDoin and Margaret conDoin.

Martin comes to the aid of his brother Prince Arutha during the second uprising of the moredhel, aided by rogue Tsurani Great Ones. He and his elf companions play a vital role in distracting and leading away the moredhel from the rift-machine that Patrus, Pug and Owyn along with Jimmy and Locklear have to destroy.

The Sacking of the Far Coast Edit

Martin and his son Marcus are away hunting during the sacking of Crydee, during which his wife Briana is killed and his daughter Margaret is kidnapped. A broken leg prevents Martin from accompanying the rescue party that sets out after Margaret and the other captives.

Some time after the sacking of the Far Coast, he abdicated his position as Duke of Crydee in favor of his son Marcus and departed to live in Elvandar, in the forests where he had spent so much of his boyhood. An old man in his nineties, he is still fit and sharp.

Martin dies peacefully in his sleep in Elvandar, at approximately ninety-six years of age.

Retrieved from "https://midkemia.fandom.com/wiki/Martin_Longbow?oldid=9139"
Community content is available under CC-BY-SA unless otherwise noted.