Edit
Mara, Mistress of the Empire 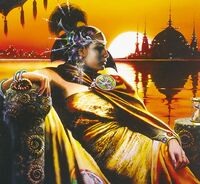 Mara is the daughter of Lord Sezu and Lady Oskiro of the Acoma, and sister of Lanokota. She had brown eyes and dark hair, and was more attractive than she realized. Especially when she smiled.

She was only 17 when her father and brother died in the Riftwar, with few soldiers and no allies. Despite her obstacles though, in a considerable short amount of time she secured more prestige for House Acoma than they ever had in their long, honourable history.

She became one of the most powerful people in the Empire and went on to change the very fabric of Tsurani culture and society for the better.

Mara’s mother died giving birth to her. As a girl, she was raised by her nurse Nacoya. She admired and respected her father and loved her brother who even taught her how to wrestle. As the daughter of a great house she was expected to marry into another powerful family to help further the honour and prestige of House Acoma.

Rather than marry and succumb to the will of her husband though Mara decided to join the Order of Lashima, defying her father to do so. She was destined to become a nun, and there she befriended another initiate Ura. After sixth months of training, Mara was accepted into the order, pending completion of the initiation ceremony.

Following the death of her father and brother during the Riftwar on Midkemia because of Minwanabi treachery, Keyoke was tasked to bring her back from the Order. At the twelfth gong ring of Mara's initiation ceremony, the ceremony was disrupted and she was informed of the death of her family. She became Ruling Lady of her house.

The same day she arrived home and performed the mourning ritual, an assassin of the Red Hands of the Flower Brotherhood but she was saved by Papewaio who, for defiling the sacred grove, wore a black rag of the condemned.

Her first rule as Lady of the Acoma[]

Not long into her rule, some of her needra were stolen by the Grey warriors, and she decided the next day to perform a ruse with a mock caravan. She lured and then ambushed them with a mock force of men led by Keyoke, they agreed to join to her service and regain their lost honor. That evening, under pressure from Nacoya, she decided to find a suitor to marry. Eventually she chose a son of the Anasati, her family's strongest enemy after the Minwanabi, because the powerful house would be a grudging ally with an Anasati son as lord of the Acoma.

She had a tenacious meeting with Lord Tecuma of the Anasati but by offering to make his son a lord rather than cosort she brought him around to the idea of marriage. She left betrothal with his crude, naive and seemingly stupid youngest son Buntokapi, rather than the seemingly more obvious choice of middle brother Jiro. This earnt her Jiro’s life long enmity.

As she returned home, she accepted to her service another band of fighters brought by Lujan; one of them being Arakasi, a former Spy Master who brought to her the information of a new Cho-ja Queen.

To obtain the Cho-ja Queen’s favor she had to travel to the Inrodaka lands and negotiate with her. After traveling for 9 days with her company in utmost secrecy, she met the Cho-ja and requested to Force Commander Lax'l to enter the hive and negotiate with the Queens herself, something that no Tsurani had done before.

As she arrived to the royal chamber, she learned that Lord Inrodaka had already organised for his ally, Lord Ekamchi, to negotiate with the new Queen. The two lords arrived above and sent messages to the queen with his offerings. Mara managed and gave better offers, and also promised to keep personal company to the new queen should she choose her meadows. She also negotiated to give 500 bags of thyza for 5 silk workers that would enhance the Acoma commercial power. She also gave 1000 swords, helmets, and shields, to be shipped to them, in order to protect the newcomer queen.

At her exit, she had a confrontation with her rivals, but the intervention of Lax'l prevented a fight.

Two weeks after that success, Mara married Buntokapi and gave him rulership over the Acoma. On their first night he abused her and ordered her that she would be a servant to him to anything he asks, not calling to her slaves.

After the feast of Chochokan, she conceived and retreated to her mother's quarters. In the meantime Bunto dragged several of their servant girls off to his bedchamber. Mara asked her hadonra Jican to buy ugly slaves in the auctions.

She bore him a healthy son and heir, Ayaki.

After the mid-autumn, she received the Cho-ja hive on the east meadow and she kept company with the new queen.

Bunto was not interested in tallies, merchandising, household budgets and accounts and forbid Jican to bother him with them. Mara once intended to bore him with them in order to assign them to her and have some control to her finances, but instead Bunto decided to see to them. Mara used Bunto's dislike of administrative duties and obsession with his concubine, Teani, to gain more control over the Acoma. By carefully pestering him with documents, she obtained a very rude prohibition to send anyone, not even his father or the Warlord, to his townhouse, where he spent all of his time. When the aforementioned persons came to the Acoma estates and requested Buntokapi's presence, Mara repeated Bunto's words to them. Bunto was forced to commit suicide for his shameful rudeness. Mara was once again ruler of the Acoma, at least until Ayaki reached his majority at 25. An issue she insisted on when Tecuma of the Anasati tried to take control of the boy’s future.

The Downfall of Jingu of the Minwanabi[]

Not long after Bunto’s death Mara was invited to celebrate the birthday of the Warlord at the estates of her arch enemy Lord Jingu of the Minwanabi. Knowing that it was a trap Mara still organised to attend least she further slight the Warlord.

On entering the grounds of the Minwanabi estate Mara saw how beautiful and easily defensible a position it was in. That her enemies should live in such a place was something that would bother Mara for years to come.

As part of the festivities Jingu had offered surety of his own honor that nothing would happen to the visiting lords and ladies whilst guesting in his house. One of the conditions was that Mara was only allowed 1 guard. She chose the loyal Papewaio. The second night of festivities Jingu organised it so that one of his Force Commander’s could murder Papewaio, under the guise of killing a thief, to help shake Mara’s confidence. Mara then tried to use her knowledge that Teani, now back in the employ of Lord Jingu, was in fact an Anasati spy to get her to either provide evidence of what happened the night before, or attack her. Teani attacked, and with the help of one of the Warlord’s Great One’s Jingu's honor was broken. He was forced to fall on his own sword.

The festivities in ruins Mara invited everyone back to her own estate to celebrate instead. There she met Tecuma of the Anasati with his armies ready to defend the young Ayaki from an impending Minwanabi strike. With Jingu no longer able to initiate the assult Tecuma was instead invited to participate in the celebration.

Against her hadonra's wishes, Mara decides to buy Midkemian slaves to satisfy her increasing need for working hands. She knew that these slaves were cheaper but harder to deal with, but since her house's finances were already suffering, she went on with her decision.

In the slave market, she finds a band of Midkemian slaves available for sale. Among them was Kevin of Zun, a tall red-headed man that was captured during the war. Mara was fascinated by their antics and bought them on the spot. On their way home it was made clear that Kevin was some sort of leader among the group and so Mara decided to try to bend him to her will in order to control the group.

Meanwhile, the newelly appointed Lord of Minwanabi, Desio, filled with grief and hate against Mara makes a blood oath to the Red God that he will either destroy the Akoma name or the Minwanabi will cease to exist. He orders his cousin , Tasaio, back from the Warlords ranks in order to help him achieve his goals. Tasaio comes up with a plan to, initially, unroot the Akoma spies in the house and secondly weaken the Akoma house by killing her Force Commander and distance Mara from her estate so they can deal with her.

Mara, on the other hand, struggles to deal with her newest slaves and by observing them, realizes that Kevin is their leader. In order to keep him away from his compatriots, and in turn make them more tractable as slaves, she appoints him her body slave and has him follow her almost everywhere. She finds herself falling in love with Kevin helps her get over her fear of intimate relationships with men and ends up becoming her lover. At the same time Kevin with his otherwordly notions and beliefs manages to change the way Mara thinks and lets her see the many flaws in the way of her people.

Servant of the Empire[]

Mara was rewarded as a Servant of the Empire by Emperor Ichindar.

Mistress of the Empire[]

Later, because of her unprecedented courageous actions for the Empire, and working towards justice and equity, her son, Emperor Justin, named her with the title Mistress of the Empire, which allowed her to be Regent.

Community content is available under CC-BY-SA unless otherwise noted.