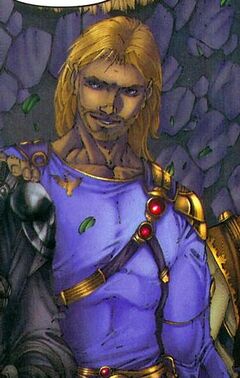 Lyam I was the monarch of the Kingdom of the Isles in the decades immediately succeeding the first Riftwar.

Born as Prince Lyam ConDoin, he was the son of Duke Borric of Crydee. He had two brothers, a younger brother, Prince Arutha and an elder half-brother, Martin Longbow (a long-held secret of Duke Borric); in addition to a younger sister, Princess Carline.

Lyam was a blond, powerfully built man with an open smile, the image of his mother's. As a youth Lyam was tall and powerfully built with blonde-shoulder length hair and a closely trimmed beard. Women of the court were attracted to his blond, good looks and his laughing, easy manner.

As he grew older in years, he is still powerful-looking. His blond hair was free of all but a little grey, turning paler, almost white, over the years, and his face showed lines from the pressure of office.

Lyam's father Duke Borric was second in line for the throne of the Kingdom of the Isles, because neither King Rodric IV (Lyam's cousin) nor the King's uncle, Erland, Prince of Krondor, had any male heirs. As a member of the royal house of conDoin, Lyam was a Prince of the Realm from birth.

As a child Lyam was tutored by Father Tully, Swordmaster Fannon and Kulgan the magician. He was known for causing trouble during his childhood and had to be punished many times for breaking rules when caught.

When Crydee became aware of the threat of to the Kingdom posed by the Tsurani, Lyam was left in command as his father left to bear the warning first to Krondor and later to King Rodric in Rillanon.

During his command of the Crydee, Lyam followed the advice of Swordmaster Fannon instead of that of his brother. At the start of the third year of the war he left Crydee to becomes his fathers aide-de-camp in Yabon.

He was succeeded as commander by Fannon instead of his brother Arutha who was by this time the same age that Lyam had been when he had gained command.

Heir to the Kingdom[]

Near the end of the Riftwar, Lyam's father was mortally wounded and as he lay dying Lyam had to give thought to the message of a possible peace treaty from the Tsurani Emperor. Following the tragic deaths of Duke Borric, Prince Erland, and King Rodric IV during the Riftwar, Lyam became the heir to the throne.

The matter of succession was unsure due to the revelation that Martin Longbow was actually Duke Borric's eldest son. Shortly before his death from wounds in battle King Rodric named Lyam as his heir, under the impression that he was the eldest surviving male ConDoin.

This disturbed Lyam due to the revelation of Martin being his elder brother. He could not bear to wear the crown if he would be thought a usurper. Pug and Kulgan believed that Lyam would make a good King as people would follow him to death. He believed that nobility have a responsibility to give their lives' work, and their lives if need be, for the Kingdom.

Lyam agreed to peace with the Tsurani and during the peace treaty signing he took part in the battle after the betrayal of Macros the Black.

Lyam became King of the Isles despite telling Martin that he should be heir. Martin renounced his claim and those of his future progeny. He named Arutha as Prince of Krondor and Martin as Duke of Crydee. He elevated Vandros to become Duke of Yabon, with Kasumi as the Earl of LaMut and a Knight-Captain. He also announced that from that day on, Guy du Bas-Tyra is a traitor and shall be hunted.

After his coronation he set out on a tour of the Eastern Realm with his two brothers.

Lyam did not have a significant role during his kingship. His brother Arutha, was much more significant.

He started a ruse to help Arutha slip out of the city of Krondor to find clues for Silverthorn in the Abbey of Sarth.

During the Great Uprising, Lyam brought his armies to Sethanon, but saw no fighting due to winds going against his ships. Afterwards, he again awarded many men for their services, foremost among which is Guy, whom he made Duke of Rillanon and First Adviser. He also kept the secret of the Lifestone and the Oracle of Aal only among his brothers and Pug and their heirs.

Lyam married Magda of Roldem in a state marriage. His only son, Randolph, drowned when he was twelve and did not have another son.

His effect upon the Kingdom was often felt. He forced Baron Otto von Darkmoor to renounce his marriage to a bar maiden in his barony and marry the Duke of Ran's daughter. Although his actions were often for the benefit of the kingdom, he allowed his sister to marry a minstrel, Laurie (though he did make the groom into a noble, naming him Duke of Salador).

Upon Lyam's death, the crown passed to his eldest nephew Prince Borric, Prince Arutha having renounced his claim upon the throne in favor of his eldest son's.