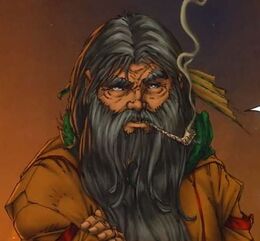 Kulgan was a Lesser Path magician known for his part as advisor to Duke Borric during the Riftwar and tutor of the conDoin sires Arutha conDoin, Lyam conDoin and the magician Pug.

Kulgan sported a beard and an ever-present pipe. He was thought to be overweight, but with cat-like reflexes that definitely did not suit his looks, but often gave him an edge when fighting an enemy.

Kulgan lived with his pet Fantus and franklin Meecham in a stone cottage located in a clearing in a forest outside Castle Crydee.

Kulgan had visited the Ishapian library at their temple in Krondor and browsed the shelves at the Abbey of Sarth, which was ten times as large.

He had friendship with Althafain of Carse and with a magical orb he gave him, Kulgan discovered young Pug during a storm.

He was friends with an Ishapian abbot, who once gave him a book. Bound in red leather, the book was a translation of a Keshian text that described the history of the land formerly known as Bosania. This book was used to test Pug's reading ability the night Kulgan first met him.

Kulgan picked Pug for apprentice at his day of Choosing and started to train him as a magician in his tower in the Castle, however something stopped him from assessing his full potential.

Kulgan was handed Fanatha's letter found in the shipwreck by Pug but, during his attempt to translate it, he activated a spell which opened a temporary rift in his tower. The hands of Fanatha's colleagues in the Assembly then attempted to pull him through the portal while unconscious. Pug then dicovered the unconscious Kulgan and threw a spear into that void, in an attempt to save Kulgan, and they closed the rift.

Kulgan aided Duke Borric on his travels to warn nobles of the coming Tsurani invasion. With him he had an amulet for weather control in case they needed to sail. He made use of it in the Green Heart to hide from the Moredhel.

During a stop on the Sorcerer's Isle, he met Macros the Black

When the Riftwar begun, he aided the Duke at his camp in Yabon. Whilst battling Tsurani at the rift, Kulgan was knocked from his horse. He was attacked by a Great One, but was saved by Pug whilst the two magicians fought. This however, led to the capture of Pug as a slave.

He remained in Duke Borric's camp for the rest of the Riftwar. When Borric died of a head wound, he continued to aid Lyam. When it was revealed Pug was granted the property of Stardock (Later turned to a Duchy by Lyam), Kulgan decided to join Pug. It was intended to be turned into a safe haven and academy for magicians.

Kulgan travelled to Stardock with Pug, Meecham, Katala, Fantus and William conDoin. They soon built a community in Stardock, and constructed a great building, resemblant to that of the City of Magicians in Kelewan. The commmunity grew, and Kulgan oversaw it's needs with Katala, as Pug was the protector of Midkemia.

Kulgan found company in Hochopepa, a Black robe from the assembly who was much like him. He came to live at Stardock with another Black Robe, Elgahar. Kulgan was fascinated with the collection of magical books Macros the Black gave to Pug.

He was present later during the events of Prince of the Blood, and presumably died between the time of Princes Erland and Borric visited Stardock and when Nakor went to teach at Stardock.

Retrieved from "https://midkemia.fandom.com/wiki/Kulgan?oldid=10303"
Community content is available under CC-BY-SA unless otherwise noted.