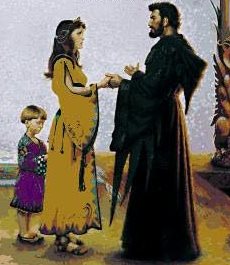 She was a house slave at the Shinzawai estates on Kelewan where she met Pug, a slave from Midkemia. They fell in love and Pug asked their lord Kamatsu for permission to marry Katala but was refused, since Kamatsu had other secret plans for him.

They remained together until Pug was taken by the Great One Fumita at a reception at the estates where Pug's magic talent was discovered.

With Pug gone she found out she was pregnant and raised their child not knowing if Pug was alive or dead. Only to be overjoyed years later when Pug, now known as Milamber, returned as a Great One to take her and their son to their new home.

After the fiasco at the Imperial Games, Pug took Katala and their son back to Midkemia where they set up home at Stardock and founded the Academy of Magicians. Katala was the head of the community along side Pug and was often referred to as "that tyrannical woman" by Kulgan purely out of affection. When Rogen passed away Katala adopted his ward Gamina as her own daughter.

Due to Pug's adoption, she was the Duchess of Stardock and Princess of the Royal House.

As Katala aged she began to suffer from a wasting disease that no priest or chirurgeon could cure her of. Eventually she would return home to the Thuril Confederation on Kelewan to die.

Retrieved from "https://midkemia.fandom.com/wiki/Katala?oldid=10066"
Community content is available under CC-BY-SA unless otherwise noted.