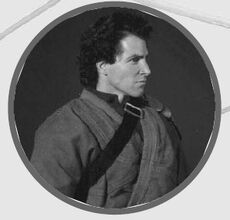 Jimmy the Hand is the son of a Krondor whore and the leader of the Mockers, the Upright Man. He was raised in the whore house for a number of years until his Mother was killed by rough brawler. Jimmy then tracked down the man who killed his Mother and murdered him in revenge. He was then discovered by the Mockers and became a thief of quite some skill.

He helped in hiding Prince Arutha and Princess Anita from Guy du Bas-Tyra's secret police force whilst Krondor was under martial law and facilitated Laurie and Kasumi escape from Krondor during the Riftwar. Whilst in hiding with Arutha and Anita, Jimmy developed a close bond with the pair and was infatuated with Anita.

When Arutha and Anita returned to Krondor after the Riftwar to become married Jimmy stopped an attack from the Nighthawks on Arutha. Because Jimmy saved Arutha rather than warning the Upright Man of the Nighthawks presence he was sentenced to death by the Mockers. However, Arutha made a deal with the Upright Man that in return for sparing Jimmy's life he would make him a Squire, revealing to Arutha in the process that he was Jimmy's father. Jimmy was however barred from ever working the street ever again, however this rule existed as more of a warning that Jimmy was not allowed to intervene in any Mockers business.

In the Krondor series Jimmy, now known as James goes on several missions for Prince Arutha, consisting on stalling a Moredhel army (Krondor: The Betrayal) to inflitrating a Nighthawks nest (Krondor: The Assassins) and nearly been sacrificed to a demon, then preventing the Tear of the Gods from being stolen (Krondor: Tear of the Gods) by a pirate named Bear.

On a visit to Stardock, James meets Gamina, Pug and Katala's adopted daughter and marries her and finds the one he was born for. They travel together to Kesh with Borric and Erland , James is sent to Rillanon to learn about being a Duke and then subsequently becoming the Duke of Rillanon. Throughout the years between King's Buccaneer and Shadow of a Dark Queen James and Gamina have two unnamed daughters (who are never mentioned again) and a son Arutha (named after Prince Arutha), as well as having two grandchildren named Jimmy (named after him) and Dashel and an unindentified daughter, who is older than the two boys.

During the Serpentwar, James was Duke of Krondor, when the first of the Emerald Queen's army arrived to Kingdom shores. He oversaw the defense of Krondor, and knowing that defeat is inevitable, planned for the city to be a deathtrap. When the city is overrun, James and his remaining guards stayed under the palace, where they were found by Gamina. As they set off an explosive chain reaction throughout the city, James and Gamina shared their last moments in a telepathic link.

Retrieved from "https://midkemia.fandom.com/wiki/Jimmy_the_Hand?oldid=9628"
Community content is available under CC-BY-SA unless otherwise noted.