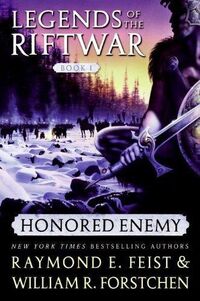 Honoured Enemy (or Honored Enemy in the US) is the first book written in the Legends of the Riftwar and is the only one of the series to be coauthored by William R. Forstchen.

Honoured Enemy is written to coincide with the events in the Riftwar Saga, acting as a sidebar to the main action from the saga.

It is the fifth year and the height of the Riftwar. Both sides, the Kingdom and the Tsurani are only doing minor skirmishes and raids and getting ready for the winter.

Dennis Hartraft, the Captain of the Haftraft's Marauders and a son of a squire in service of Duke Brucal of Yabon, prepared a mass grave for his men. He lost eighteen of them and six wounded when they battled with fifty-two Tsurani soldiers, and saved a priest of Sung, Brother Corwin. Among the dead is Dennis' friend and mentor, Jurgen, who lost his life saving Richard, the company's newest recruit. Disgusted, he decided to winter in Brendan's Stockade.

Meanwhile, Asayaga, a Force Leader of the Kodeko, were ordered to seize the same place. He is angered by the madness of the order, for it may be a ploy to bring shame to his house. Worse, he is spied by Sugama, a lackey of a rival family, the Minwanabi.

When the Tsurani arrived at the stockade, they discovered that it is a trap set by the moredhel. Minutes later, the Marauders also arrived, bringing the whole strength of the moredhel on them. Gregory, a Natalese Ranger, halted the fight, and suggested they swing north. They broke off their fight and left each other.

The Marauders and the Tsurani again met each other in a barrack few miles away from the stockade. They stormed it together and held it for the moredhel attacks. After this, they chose to have a truce and find a way to escape.

They traveled to the north, pursued by the moredhel led by Bovai, a lesser chieftain of Clan Raven. He wanted Haftraft's for the glory while he seeks vengeance from Tinuva, his brother turned eledhel whom he considered a traitor.

At a valley, they found Wolfgar, a friend of Dennis' grandfather. The two companies spent the winter there, waiting for the snow to melt in the pass. All that time, the two companies grew to be fond of each other, with the Tsurani even giving them a feast as guest for their Day of Atonement. However, a drunken brawl, bringing the death of Sugama and a Kingdom sergeant, Alwin Barry, almost brought them to a battle. They were stopped by the warning of Richard: the moredhel are coming

They were betrayed by Corwin, who is actually an agent of Murad. They hurriedly left, along with the women and children. Wolfgar stayed, asking Dennis and Asayuga to take care of his people and his daughters: Alyssa and Roxanne.

Dennis learned that the bridge that they were to cross to was destroyed by the goblins. To buy time, Tinuva chose to challenge Bovai in a battle while Dennis and the others are escaping but was killed.

Dennis and Asuyaga decided to attack the moredhels because they don't have time to repair the bridge. They won, killing Bovai and scattering the rest.

When they reached the realm of the dwarves, they parted ways as honored enemies, vowing to never to cross swords with each other.

After five years, Dennis became a squire in service of the Baron of Highcastle and wedded Roxanne. He named his son Jurgen.

Asuyaga became a squire to Lord Kasumi, Earl of LaMut and gained the estate of Valinar, Dennis' ancestral lands. He married Alyssa and had many children.

Note: Australia, New Zealand and South Africa have the same release dates as the UK.

Since its release in 2001, Honoured Enemy as been released in at least 7 different countries and has been translated into at least 5 different languages other than English.

Retrieved from "https://midkemia.fandom.com/wiki/Honored_Enemy?oldid=10236"
Community content is available under CC-BY-SA unless otherwise noted.