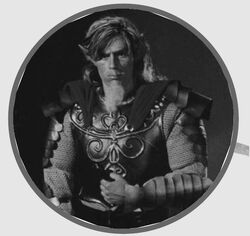 He married two wives, Cullich or Clothild. Some accounts say he has two sons while others say three sons. They also say he has one daughter. One of his sons was Arkan.

He was a prisoner of Locklear who took him from the Northlands and was taking him to Krondor. Near Yabon Owyn Beleforte on his way to Tiburn, took care of Locklear's leg and during the night Gorath killed Haseth, an assassin who came for him.

The next morning Locklear took off Gorath's chains and took Owyn as a Squire, at least until Krondor.

Gorath looks menacing with a haunting quality in his eyes that seems wolfish, as if he is a creature on the run. A long scar, nearly hidden by his hairline, traces the left side of his face from temple to cheek.

Retrieved from "https://midkemia.fandom.com/wiki/Gorath?oldid=8692"
Community content is available under CC-BY-SA unless otherwise noted.