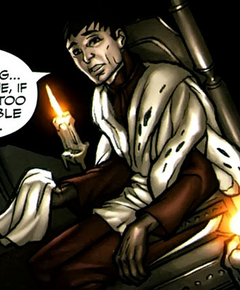 Prince Erland of Krondor was the brother of King Rodric III. He served as Prince of Krondor and Lord-Marshal of the Armies of the West during the Riftwar. He was the husband of Alicia of Timons and father of Anita.

The Prince is young, in his thirties, if not a vigorous and well man, a reflective person. Pug considered him warm and friendly and cared for the comfort of his least-important guest.

When his brother died, Erland refused the crown in favor to young Rodric his nephew, because of his ill health. Guy du Bas-Tyra backed Rodric and the assembled Congress of Lords ratified his succession.

A battle ensued over who would be the King's Regent. Guy had nearly won the position when DukeBorric (who arrived late) objected, supported by Duke Brucal of Yabon and Prince Erland; Caldric of Rillanon was appointed so.

Two years before the Riftwar, when a delegation of nobles was executed by the King, Erland left for Rillanon personally and asked from the King to reduce the spending and ease the burdens on the people and demanded reparation for the execution. Rodric almost seized the Prince, but restrained from his counselors. Since then, Erland never visited Rillanon, until he was buried in the family vault.

Owing to his ill health, the business of running Krondor's military fell to Dulanic, Chancellor of the Principality and Knight-Marshal of Krondor.

King Rodric was afraid of Erland since he was the heir apparent; someone may plot to overthrow Rodric and take his crown. To prevent a civil war the King decided that none may gather the armies without his authority.

When Duke Borric visited Erland to warn him about the Tsurani invasion, Erland said that he could do nothing to organize the Armies of the West, and told them to visit the King himself in Rillanon.

Arutha wanted to ask for Prince Erland's aid for the effort against the Tsurani but were surprised when he learned that Guy du Bas-Tyra seized Krondor. When Guy took control of the city, he asked Prince Erland for the hand of Anita in marriage and then named him the heir for the throne of Krondor. Erland refused this and were imprisoned in their own palace's dungeon with his daughter. The Mockers helped Anita and Arutha in getting out of Krondor.

After their escape, the Mockers were picked by the secret police, forcing them to lie low. However, Jimmy the Hand and his companion saved them, and stumbled across the Prince. They relayed to him the news of Anita's escape with Arutha, relieving Erland of his worries.

He died in the dungeons of Krondor, his failing health not withstanding the cold. With his demise, Duke Borric became heir to the throne of the Kingdom of the Isles.

Retrieved from "https://midkemia.fandom.com/wiki/Erland_(Prince_of_Krondor)?oldid=8858"
Community content is available under CC-BY-SA unless otherwise noted.