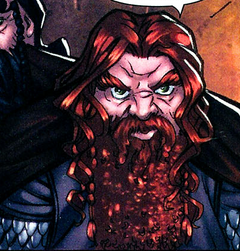 He was Warleader of the Grey Towers and chief of the village Caldara. He later became King, though he did not wear the crown. Dolgan was the father of Weylin and Udell, and grandfather to Hogni.

Dolgan had red-brown hair and green eyes, with a hook-shaped nose. His beard extended below his belt. He was known as a person of high principle and bravery, possessing a dry wit and keen mind.

Dolgan was born to Tagar, 527 years before the invasion of Delekhan.

He aided in the Siege of Carse and visited Crydee during that time where he met a young Borric.

He would meet the Duke again near the Grey Towers while hunting for goblins with his sons and thirty-eight Dwarves. He found the Duke's party in a cave and shared with them what they knew about the Tsurani invaders. Dolgan proposed that the party should pass through the Mac Mordain Cadal since the South Pass was blocked and the Straits of Darkness were not sailable during winter. Indeed the dwarf guided the party through it, also showing them the glory holes and the waterfall of Wynn-Ula. However when they approached the other end, they were attacked by a Wraith. Kulgan summoned a smoke to block the wraith from approaching them. They flew to the exit but Tomas remained behind the wraith.

As Dolgan led them out, he promised to enter the mine once more and find Tomas, should he had escaped the wraith. After following his tracks, he found himself in an abandoned palace, leading to a throne room where the dragon Rhuagh lived, and Tomas sitting beside him. Rhuagh explained Dolgan that he meant no harm, and just wished for the two guests to attend his deathwatch since there was no other dragon with him. After Ruagh told them about his life, Dolgan, as asked, used a magic rod (left by Macros the Black for the dragon) which rejuvenated the old dragon before vanishing, leaving no bones for the scavengers.

As Ruagh told him before vanishing, he wanted his two guests to take anything they wished from his hoard, especially two treasures found in boxes. Dolgan to his astonishment found that his gift was the Hammer of Tholin. On their exit, they encountered once more the wraith and bands of moredhel. Dolgan led Tomas to his village 5 days later, and proposed him to stay with them through the winter.

Together with Tomas, he led one hundred fifty dwarves to raid the Tsurani in the mountain tunnels. They battled with the Tsurani, and for the first time, the Cho-ja. When the enemies' numbers are getting too much, they retreated and tried to find a way to Stone Mountain. Due to continuous skirmishes, they were forced to stay in Elvandar. There, he became worried when he saw the change in Tomas since he wore the armour gifted to him by the dragon.

Dolgan led his company and captured a band of Tsurani. After learning the news, Tomas, now coming closer to becoming a Valheru, started killing the prisoners until he saw a slave boy, bringing to his mind his childhood friend Pug. His human nature prevailed and asked for forgiveness for his actions.

After the war, the dwarves held a moot to proclaim Dolgan the King of Dwarves in the West. The moot was interrupted by Martin Longbow, who was asking for reinforcements to come to Sethanon to combat the moredhel army.

King Dolgan was now 527 years old. He welcomed Gorath and Owyn and sent an escort with them on their way to Elvandar. Gorath is the first moredhel he actually had a civil word with, as dwarves and moredhel are natural enemies.

During the destruction of E'Bar at the end of the final riftwar, Dolgan was killed when the mines of the Grey Towers collapsed. The Hammer of Tholin was buried with him, and since the Hammer is considered a requirement for being crowned, Dolgan is considered the last king of the Dwarves.

Retrieved from "https://midkemia.fandom.com/wiki/Dolgan_Tagarson?oldid=10219"
Community content is available under CC-BY-SA unless otherwise noted.