Start a Wiki
Daughter of the Empire 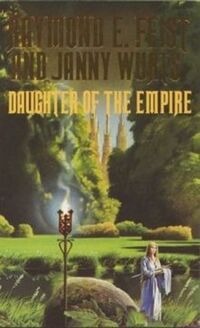 In the world of Kelewan, Mara of the Acoma is on the verge of becoming a priestess of Lashima when she is called to becoming the new ruling Lady of her house. Forced into quickly learning to play the Game of the Council due to the deaths of her father and brother she embarks on an audacious plan for the survival of everything she loves.

At the age of 17 Mara learns of her father and brother’s deaths during the ceremony to initiate her into the service of Lashima. Her loyal Force Commander Keyoke informs her of the plot to kill her family was initiated by the Acoma’s long time rivals the Minwanabi.

Her forces decimated to only 37 men Mara and the Acoma are saved total annulation by the quick thinking of First Strike Leader Papewaio, saving Mara from assassination in the Acoma contemplation glade whilst she mourned her family. Learning from her mistakes Mara works hard to remember all the advice she had overheard as a child at her father’s knee. With the help of her loyal advisors Keyoke, Nacoya and Jican, she sets a path to turn her fortunes around. She begins with a series of bold decisions. By embracing the Grey Warriors who have harried her needra herds she is able to boost the size of her army. This act also earnt her the loyalty of Arakasi a former spymaster. His information meant she was able to secure a new Cho-ja Queen for her estates, further boosting her prestige and army.

Still not in a secure place politically she decided to marry into the family of her second biggest threat the Anasati. Rather than take a consort as expected she made an offer Lord Tecuma of the Anasati couldn’t refuse — that his son would be the new Lord of the Acoma. Rather than choosing the wily Jiro as her husband Mara choose the seemingly stupid Buntokapi.

The marriage was not a happy one, but did result in Mara having her first son Ayaki, and securing the future loyalty of the Anasati. Through careful planning Mara sets in motion a plan that ends with Buntokapi having to take his life to appease for the dishonour he did to the house Acoma.

Returned to the position of Lady of the Acoma, Mara is still under threat of the Minwanabi. Yet she is forced to go into enemy territory to help celebrate the birthday of the Warlord. Even under his personal safety Lord Jingu of the Minwanabi is able to orchestrate the death of loyal Papewaio. When the following night a meeting Mara has with Buntokapi’s former mistress Teani ends badly it is through the services of one of the Warlords Great One’s that the truth of the situation is shown forcing Lord Jingu to fall on his sword, disgraced.

Always one to take advantage where possible Mara invites the Warlord back to her own estates to finish the festivities, her prestige taking on new levels.

Retrieved from "https://midkemia.fandom.com/wiki/Daughter_of_the_Empire?oldid=9130"
Community content is available under CC-BY-SA unless otherwise noted.