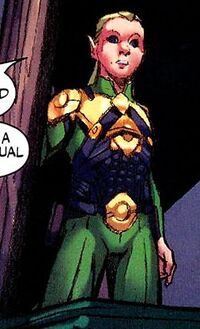 When Calin's father died, he became the Warleader of Elvandar. 30 years before the first Riftwar he had met the magician Dorcas.

Calin accompanied his mother and Tathar to Crydee in order to share with Duke Borric their knowledge about the Tsurani invaders. While there, he first met Pug, apprentice to the Magician Kulgan.

When the war erupted, Calin was in the defense of Elvandar against the intruders, until they were joined by Tomas and the dwarves of the Grey Towers. During the Riftwar, Tomas was accepted as the new warleader due to his extraordinary powers compared to Calin. For six years they held the boundaries of the forests as Tomas grew into Ashen-Shugar, and fell in love with Calin's Mother-Queen.

But like all the older elves, he feared Tomas and what he is becoming, and felt there will be trouble when Tomas press his suit for the Queen.

Calin named Tomas the Warleader of Elvandar and Prince Consort to the Queen after Tomas declined his claim for the throne.