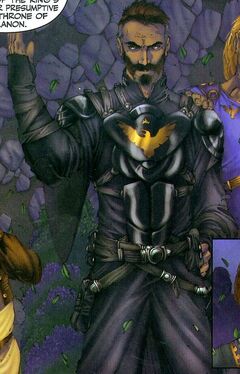 Borric conDoin was the Duke of Crydee during the Riftwar and Prince of the Kingdom; Lord of Crydee, Carse, and Tulan; Warden of the West; Knight-General of the King's Armies and heir presumptive to the throne of Rillanon. He is second in line for the throne behind Prince Erland of Krondor, the uncle to King Rodric IV.

Borric has three sons: Martin Longbow, Lyam conDoin, and Arutha ConDoin, though he does not publicly acknowledge Martin as his eldest son until his death at the end of the Riftwar, having him serving as a Huntmaster as part of the court. He also has a daughter, Princess Carline conDoin.

He learned warfare fighting against Kesh in the Vale of Dreams. At a young age he was second Knight-General in the West and four years later, King's Warden.

He had an illegitimate affair with a servant girl, and when his son was born, he sent him to an abbey. When Martin returned to Crydee, Borric placed him under the care of his old Huntmaster. When the old Huntmaster died, he was replaced by Martin.

When he was young, he was best friends with Guy, his cousin, and Dulanic, with Brucal as their senior Squire. His friendship with Guy ended when they competed for the hand of Catherine, with Borric eventually winning her and bringing her to Crydee.

Borric was a just ruler and good neighbor with the Free Cities; however, he had some trouble with certain eastern dukes, especially his cousin, now Guy du Bas-Tyra. At the death of King Rodric III, Borric was late to the Congress of Lords to elect a new King. Guy had nearly won the position to become King's Regent when Borric came to object, supported by Duke Brucal of Yabon and Prince Erland. Caldric of Rillanon, Catherine's uncle, was appointed Regent.

Sometime later, he made Kulgan, a magician, a member of his court, one of the few times a magician received such a high honor.

He presided over the Choosing of Pug and Tomas, and brooked no argument when Kulgan requested Pug to be a magician's apprentice.

He also promoted the orphan Pug to Squire when Pug saved Carline's life from trolls during an afternoon ride.

After the discovery of the Tsurani shipwreck on the Sailor's Grief, Borric sought the counsel of Queen Aglaranna who came to Crydee with her advisors.

He decided to take Arutha, Gardan and Kulgan to journey to the Free Cities, and on to Krondor to speak with Prince Erland, his cousin. At first they were accompanied by Martin and his trackers, until they parted near River Boundary

Before the journey Borric had sent pigeons asking troops of guards from the keep at Carse to wait for his party with fresh horses from Jonril in the Green Heart. However the Moredhel had attacked the second appointed meeting place, and Borric's party fell into their ambush. They lost eighteen men, six were wounded, and all the mules and baggage were taken. They flew towards the Grey Towers in the east, but skirmishers were herding them in a circle, and led them into the Moredhel's main strength, more north than east.

Only thirteen men and six horses survived the day, but with a magic trick by Kulgan evoking mist, they hid in a clearing until the Moredhel passed them. Eventually, after a skirmish with Goblins, they were joined by Dolgan, who guided them through Mac Mordain Cadal. After some losses (including Tomas) they reached Bordon and were hosted by Talbott Kilrane, his trading agent with the Free Cities, already contacted by Meecham.

When the Duke explained to him the danger of an impending Tsurani invasion, Talbott offered one of his personal vessels, the Storm Queen to transport them to Krondor.

When they finally reached Krondor, the meeting was not how Borric wished since Erland had no authority to muster the Armies of the West. They were to go and ask the permission of the King himself, accompanied by the Royal Krondorian Lancers.

On their way to Salador, they came across a storm of unusual intensity in the mountains west of Darkmoor and stayed at an inn outside the village. Later they fell upon a village being troubled by bandits whom they drove away. The villagers welcomed and hosted the Duke's party, offering food and beds.

In Salador, the group was hosted by Duke Kerus, who shared his concerns to the Duke about the mental state of the King, and his tense relationship with Prince Erland.

On his trip to Rillanon to gain King Rodric's aid for the Western Realm, he meets his uncle-in-law, Caldric. They soon realised King Rodric is mad and under counsel of Guy du Bas-Tyra and can gain no help from him. Later while they planned how they could persuade the King, the invasion began. Before Guy du Bas-Tyra could arrive and advise the King, the King unexpectedly granted Borric the command of the Armies of the West.

He organized a reconnaissance to the Tsurani encampment to see what the Tsurani's plans were, and assigned Kulgan and Pug to join. He mourned when he learned that Pug was captured by the Tsurani.

When his aide-de-camp [did what?], he sent for Lyam to join him in Yabon, while naming Fannon as garrison commander. Arutha did not like the orders given. However, after the siege of Crydee, Fannon advised that Arutha be assigned as commander of Crydee, with Borric ratifying his command.

He was injured mortally in the great Tsurani offensive, while leading a counterattack to rescue surrounded soldiers, mainly Hadati hillmen, auxiliaries to the garrison of Yabon. Such was his bravery that the Hadati sing his name and make sagas in his honor.

Upon Borric's deathbed, he asked Duke Brucal to be his witness when he acknowledged Martin Longbow as his eldest son.

This complication almost caused a civil war because Lyam was named Heir to the throne by King Rodric IV. Fortunately, Martin renounced all his claims and rights to the throne. Lyam promptly named Martin the Duke of Crydee, while Arutha assumed the position of Prince of Krondor.

Borric also adopted Pug as a member of the conDoin house, and gave him and Kulgan the title to an island in the Great Star Lake in Shamata. His wish was for them to build an academy, hoping that someday it would become the greatest center of learning for the Kingdom.

Past fifty, Duke Borric of Crydee still moved with the fluid grace and powerful step of a born warrior.

Except for the grey at the temples of his dark brown hair, he looked younger than his age by twenty years. He was dressed from neck to boot in black, for he still mourned the loss of his beloved wife, Catherine.

At his side hung a black scabbard sword with a silver hilt, and upon his hand was worn his ducal signet ring, the only ornamentation he permitted himself.

Retrieved from "https://midkemia.fandom.com/wiki/Borric_conDoin_(Duke)?oldid=10420"
Community content is available under CC-BY-SA unless otherwise noted.