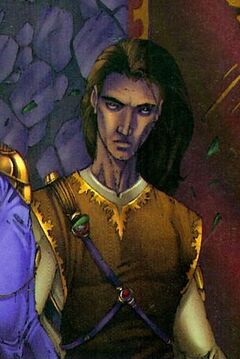 Prince Arutha conDoin is the Prince of Krondor; Lord-Marshal of the Western Realm and of the King’s Armies of the West, Heir Apparent to the throne of Rillanon.

He is the youngest son and middle child of Duke Borric of Crydee and Catherine, the aunt of King Rodric IV.

As a child he felt his father's belt only once as punishment. He learned that his father expected his orders to be followed.

Arutha is dark haired, intense and brooding and is described as having dark moods and not being as likable, the opposite to his elder brother Lyam who is older by two years.

As a younger son he was expected to either pursue a military career in the border baronies or to be given a minor earldom. He was trained by Swordmaster Fannon, Father Tully and the magician Kulgan. His respect for Kulgan had such an impact on him that later in life he requested for a magician as an advisor in the same manner as his father was advised by Kulgan.

At the start of the Riftwar, Arutha is the only person apart from Pug and Tomas to see the Tsurani ship wrecked against the cliffs of the Sailor's Grief. He agrees with his father about the threat that the Tsurani pose and accompanies his father on his trip to Rillanon to gain King Rodric's aid for the Western Realm. Once there they realise King Rodric is mad and can gain no help from him.

Later while they stayed there, the invasion begins, before Guy du Bas-Tyra could advise the King; his father gains command of the Armies of the West, and Arutha is sent back to Crydee through the Straits of Darkness to aid his brother with the defense. He remained there for three years.

When Lyam leaves to become their father's aide-de-camp at Yabon, Arutha is reluctant to accept his old teacher Swordmaster Fannon as commander of the garrison as Lyam held the position. Two weeks later, he was alerted about a strange ship approaching the harbor of Crydee while the lighthouse at Longpointwas unlit. Fearing about an accident, Arutha ran with two soldiers to investigate. There they found the tower overran and Arutha, although wounded, managed to see that the merchant ship was armed, and lit an alarming beacon, right before the ship entered the harbor.

During the raid Arutha saves the sea Captain, Amos Trask, who was attempting to bring supplies to the besieged castle. During the Siege of Crydee the swordmaster is wounded and Arutha assumes command of Crydee, where he shows himself to be an effective commander, gains the permanent command of Crydee and the respect of his soldiers and Kasumi, the leader of the Tsurani attacking the castle.

In the ninth year of the Riftwar, Arutha fears that the Kingdom will lose the war as the captured slave Charles tells him of the new banners amongst those of the Tsurani indicating an increase of troops during the campaign of the following year. He travels to Krondor with Martin and Amos aboard the Wind of Dawn in an attempt to gain the aid of Prince Erland. Some sailors try to rebel the attempt to travel through the Straits of Darkness during the winter, but Amos quickly quells the rebellion.

Upon entering the city he finds it under the command of Guy du Bas-Tyra, long time enemy of Duke Borric. After running afoul of the secret police he seeks the aid of the Guild of Thieves to escape the city. During his time hiding with the Mockers he meets Jimmy the Hand, a fifteen year old thief, and befriends him by teaching him how to fight with the rapier. In addition, he meets Princess Anita who is also being hidden by the Mockers. The Mockers and some smugglers help Arutha escape to Crydee along with Martin, Amos and Anita. During the escape he throws his rapier to Jimmy after seeing him being attacked by armed men.

On his return to Crydee he finds that one of his closest friends, Roland, has died during the winter. Later he receives news of his father's death from Lyam and he travels to the location of the rift for the signing of the peace treaty. Arutha commands the Kingdom troops to attack the Tsurani after the treachery of Macros the Black. With Pug, Kulgan and Meecham he visits Sorcerer's Isle on his way to Rillanon before the coronation of the new King due to the death of Rodric in battle. While visiting his father's tomb with Lyam he is told that Martin is actually his eldest brother and has the first claim to the crown because Borric recognized him as his son on his death bed. Arutha, unprepared to risk civil war is prepared to kill Martin if he accepts the crown. After Martin refuses the crown in favor of Lyam the two brothers reconcile, and go to find Amos stealing the King's ship, the Royal Swallow, which Arutha says he will have Lyam give to Amos. At this, Amos says that Arutha takes the fun out of life.

Pug thinks that Lyam will make a good King but he also thinks that Arutha would make a great King because he would keep his people alive. At the end of the Riftwar Arutha is named Prince of Krondor and sets out on a tour to the Eastern Realm with his elder brothers.

On returning from his tour he proposes to Princess Anita who accepts and he then travels ahead of her to Krondor for their marriage, it being tradition that the Prince of Krondor marry within the city of Krondor. On entering the city an assassin attempts to kill Arutha while he travels with Laurie and without his personal guard. The attempt fails due to the intervention of Jimmy the Hand. Jimmy breaks into the palace grounds to inform of the attempt and to tell him that the assassin was a member of the Nighthawks. With Jimmy's help, he is able to capture two members of the Nighthawks and to question them whereby he learns of the dark powers arrayed against him. Arutha makes use of Jimmy again to contact the leader of the Mockers in order to gain his aid in tracking down the Nighthawks' lair within the city. As a consequence of this meeting Jimmy is made a squire and member of Arutha's court. The Nighthawks' headquarters were found and Arutha led the attack that decimated the Nighthawks in the city only after they burnt the building to prevent the dead rising again.

At his wedding to Princess Anita a Nighthawk agent, Laughing Jack, mortally wounds Anita with a poisoned bolt meant for Arutha. With the help of Father Nathan and Pug she is kept alive in stasis till a cure can be found for the poison. Tully and Kulgan say that the Abbey of Ishap by Sarth may know the cure for the poison so Arutha journeys to Sarth with Martin, Laurie, Gardan and Jimmy. On their journey to Sarth they are attacked by Black Slayers and are again attacked when they reach the Abbey itself. The Monks are able to find a possible cure for the poison called silverthorn but their knowledge ends with the statement that the eledhel may know how to find it. During the trip to Elvandar they pick up Roald, a mercenary friend of Laurie, and Baru, a Hadatian, as traveling companions.

In Elvandar, Arutha learns the location of Silverthorn and he sets of to Moraelin to retrieve the cure. At Moraelin Arutha is able to find silverthorn and to escape a trap set by Murmandamus. On the journey back to Elvandar they are beset by enemies and nearly killed but are saved by the intervention of the elves. On returning to Krondor Anita is cured and the couple finally marry along with his sister Carline to Laurie.

A year later the Nighthawks make another attempt on Arutha's life. Arutha orders Krondor under martial law to capture the escaped Nighthawks. A week later, in an interrogation, one of the Nighthawks throws a dagger at Arutha, supposedly killing him. In actuality Arutha allowed a body of a slain Nighthawk, whose appearance was identical to Arutha, to be presented as his corpse. With most of the population thinking him dead, Arutha leaves Krondor with Laurie and Roald to scout out Murmandamus' camp at Sar-Sargoth. Their goal is to determine the moredhel lord's plan of attack. Jimmy and another squire, Locklear, learn of this plan and intercept them on the road.

Along the way they are captured by distant kin of Baru, and head to a community called Armengar, outside the bounds of the Kingdom. There they see Amos Trask again and learn that Guy du Bas-Tyra was commander there. Within a week Murmandamus launched an attack with an army of nearly fifty thousand, eventually overunning Armengar. Arutha and his group, meeting with a squad of elves, headed by Galain, flee to Highcastle, which was overuse too, killing the Baron of Highcastle.

They learn that Murmandamus was heading to Sethanon, a city of Valheru ruins, which is located in the middle of the Kingdom. This being a poor strategic point, Jimmy comments that Murmandamus might be looking for an item of magic that would repel the King's armies when they surrounded Sethanon. Thinking this to be true, the band traveled through the Blackwood forest, where they discover the Glameredhel, or "mad elves." Convincing their king, Earanorn, to let them travel in peace, and instructions of how to get into Elvandar, they reach Sethanon just a few days before the moredhel army.

During the following battle, Pug, Tomas, and Macros return on the dragon Ryath, to tell Arutha the secret of the Lifestone, an ancient Valheru artifact that would wipe out all life on Midkemia if activated. To battle Murmandamus, Macros infuses Arutha's sword with the power of an Ishapian talisman, giving it the power to negate all battle magics (and as the reader discovers in a later book, Krondor: The Assassins, inflict more damage on demons). Arutha kills the moredhel lord, revealing that it was a magically changed Pantanthian.

Prince Arutha dies when nearly 80 years old from complications after a fall that broke his hip. At the time of his death his eldest son Borric had been King for five years since King Lyam's death. Arutha's wife, Anita, his eldest brother Martin, and his sister Carline all survive him. One of the last significant acts during his reign was to give Calis his desperate men for a spying mission on Novindus. He is succeeded by Nicholas, his youngest son.

He is remembered in later years by Pug as one of the greatest men that he ever knew.

Retrieved from "https://midkemia.fandom.com/wiki/Arutha_conDoin?oldid=10439"
Community content is available under CC-BY-SA unless otherwise noted.