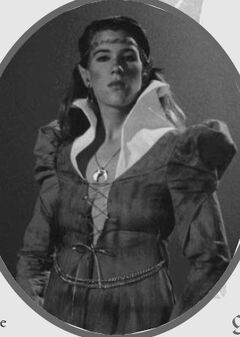 She was the wife of King Aidan and the mother of Calin. After the Riftwar she married Tomas, and bore him 2 sons, Calis and Calin.

Considered beautiful even by elven standards, Aglaranna was tall. She was topped with thick red hair streaked with golden highlights, with large blue eyes, high cheekbones, and a strong, feminine jaw. A full smile would produce white teeth that shone through her nearly red lips. Around her head she wore a circlet of gold.

Before the Riftwar, she and Tathar went to Crydee in order to share with Duke Borric their knowledge about the Tsurani aliens. This was one of the few times she had ever left Elvandar.

When the war erupted, they were joined by Tomas and Dolgan and his dwarves of the Grey Towers. For six years they held the boundaries of the forests as Tomas changed into Ashen-Shugar, and fell in love with her.

Once, Macros approached Aglaranna and warned them about the Tsurani invasion the next day. Tathar trusted him as he had been a friend of his father (and Aglaranna's) before she could remember. Macros also told her about the fate of Tomas, that although the power of the Valheru could be disastrous and consume even himself, the Spellweavers (as well as his love for her) do help his humanity to preserve in the transformation.

After the battle, Aglaranna admitted her feelings to Tomas and took him as her lover, thereby losing her power to command him. Tomas underwent a great change, bringing the forces of the Valheru and the human into balance. In a titanic inner battle, the human was nearly overcome, but at the end he mastered the raging inside him that was once the Dragon Lord and at last discovered peace within his soul. He became Prince-Consort to Aglaranna and was named Warleader by Calin.

After the Riftwar, Aglaranna announced to Tomas that she is pregnant to Calis.

When Princess Anita was poisoned by silverthorn, Prince Arutha journeyed to Elvandar to seek clues to finding this rare plant. Aglaranna commanded the Spellweavers, led by Tathar, to help his cause.

Retrieved from "https://midkemia.fandom.com/wiki/Aglaranna?oldid=9060"
Community content is available under CC-BY-SA unless otherwise noted.