Edit
A Darkness at Sethanon 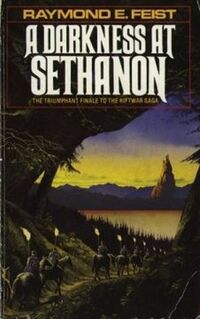 A Darkness at Sethanon is the third and final book in The Riftwar Saga. It details how Murmandamus, a new prince of the Dark Brotherhood, marshals the forces of the Moredhel and invades the Kingdom, with the intent of finding the Lifestone, a powerful relic with which he will be able to destroy every living thing in the world, so as to resurrect the Valheru Lords of old. Only Pug and Tomas can stop this new evil, thereby ending the Great Uprising.

A year has passed and the Festival of Presentation is underway. Peace reigned all over the Kingdom.

Arutha, Prince of Krondor, uses an attempted assassination as a ruse to fake his own death so that he may travel north to confront Murmandamus. In his travels to the Northlands, Arutha finds his father's former enemy, Guy du Bas-Tyra, as the Protector of the city Armengar. A historic battle ensues, which ends in the destruction of the city. Murmandamus and his forces then strike south to Sethanon, a city beneath which the Lifestone had been buried in the ancient past.

Meanwhile Pug and Tomas begin searching the world, and eventually beyond, for the famed sorcerer Macros the Black, thought killed when he helped to destroy the rift, but were caught in a time trap. With the guidance of Macros, the history of the universe is revealed to Tomas and Pug. Tomas is then told of his complete Valheru heritage.

A battle ensues at Sethanon, during which Pug and Macros work together to prevent the Valheru from re-entering Midkemia. At the same time, Arutha, named by destiny the Bane of Darkness, engages in a duel with Murmandamus. He defeats Murmandamus, discovering in the process that he is not moredhel, but one of the Panthathians, a race of evil snake-men. He had been magically disguised as a moredhel in order to manipulate the Dark Brethren into aiding them in their plan to release Alma-Lodaka, a Valheru who had created the Panthathians and was worshipped as a God by them, by capturing the Lifestone.

Shortly after, Pug and Macros accidentally let an agent of the enemy through (it takes the form of Draken Korin an other Valheru) and a Dreadlord. Then a titanic battle ensues between Tomas with Ryath against these forces. At the climax of the battle Ryath is defeated by the Dreadlord, and Tomas must fight the Dreadlord and the Valheru. During this time, Draken Korin crawls to touch the Lifestone, so Tomas leaps to stop him and while doing so, he stabs the Lifestone and releases the Valheru, but the Gods themselves intervene and stop it.

Afterwards, awards are given out to Amos, Baru, Laurie, Arutha and others; Martin Longbow announced his wedding; while Pug and Tomas are told by Macros that they must be the Guardians of Midkemia, he then vanishes, suggesting he died.

The secret of the Lifestone will only be known by the conDoins and Pug, and its guardian, the Oracle of Aal.